Gallipoli: In what will prove to be the last major offensive in the Gallipoli campaign, a force of New Zealand, Ghurka and (later) Australian troops launches the attack on “Hill 60”.

Armenian expulsions: Harrowing stories continue to emerge about the forced mass expulsion of Armenians through and out of Anatolia.

Armenia: The New York Times reports on the horrors of the Turkish treatment of Armenians:

“Armenians are sent to perish in the desert. Turks accused of plan to exterminate Whole Population. People of Karahissar massacred” [New York Times]

BORN TODAY: in the skies over the Western Front – The Fokker Scourge.

Ireland: At the funeral of exiled Irish Fenian Jeremiah O’Donovan Rosse, Pádraig Pearse gives “one of the most famous speeches of the Irish independence movement stirring his audience to a call to arms” [Wikipedia]. 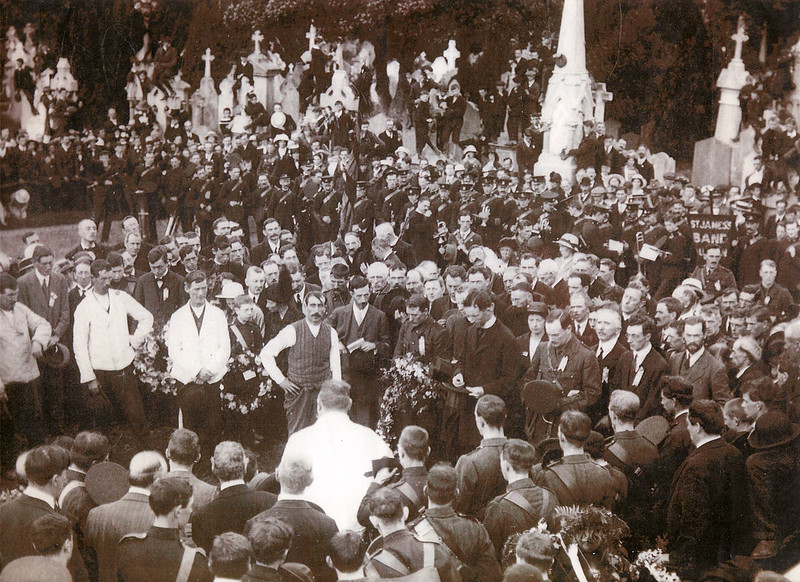 Some, at least, in Ireland, do not forget the call to arms:

In the Near East: the new (and incomplete) Germany to Baghdad railway begins transporting Armenians out of Anatolia and into Aleppo, now a (still troubled) city in Syria. Within 3 weeks, 20,000 are deported, and tales of abuse and atrocities are multiplying. [a report quoted in: “The Treatment of Armenians in the Ottoman Empire, 1915-1916”, by Bryce et al]

A bored expat writes: T. E. Lawrence (later – “of Arabia”), stationed as an intelligence officer in Cairo, writes home to his family:

“There is of course, nothing happening here, or likely to happen. Reports, and ciphering and drawing maps all day. The Dardanelles show will end soon:- Syria is quite quiet, though the Armenian villages in the North have been broken up, and the people scattered to various districts. No massacres, however, as yet. I can’t think of anything else to say:- The hot weather, as Father is interested in it, will end at the end of September. It’s not very hot now – and besides I am never more than about 5 minutes in the open air.”

BORN TODAY: in Windsor, England and educated at Sherborne school – “the Great Omani”, escapalogist. Before he died in 2007, aged 92, he wrote a short poem for his funeral:

They lay the Great Omani in his box

They have done it up with nails not locks

But at his funeral do not despair

Chances are he won’t be there.

BORN TODAY: in five schools in north east Surrey and (what is now) south west London –  the Croydon War Hospital, under the command of Colonel Morris and  staffed by 80 nurses, “many of whom were members of the local Voluntary Aid Detachments.  (However, at one time, the entire nursing staff consisted of nurses from Australia.) “

War at Sea: off the coast of Kent, the British destroyer HMS Lightning strikes a mine, which splits it in  half, sending its bow section and 15 of its crew to a watery grave.

Gallipoli: Australian soldiers, pinned to their positions for many weeks since the initial Gallipoli landing, are praying for rain. Herbert Reynolds records in his diary: “At about 9pm a thunder storm passed over but we got very little rain, a good fall of rain now would be welcome as we are depending on the water from the boats for our supply, the holes in the gullies are all dry and there is no water other than that in our vicinity except salt sea water.”

Turkish Armenia: In the city of Tarsus in the south east of Turkey, a foreign resident confides in a diary: “Half the town want to ‘store’ things here, to be ours if they [ie – Armenian deportees] never return; rugs, coppers, etc.—but we may be blown up, who knows?”

Gallipoli: a brief truce is arranged between the warring nations so that the thousands of dead on both sides can be buried.

Anatolian atrocities: In response to growing tales of forced marches and massacres of Armenians in Anatolia by the Turkish government, the foreign ministers of the Triple Entente (France, Russia and Britain) issue a proclamation vowing that Young Turk (party) leadership would be held responsible for “these new crimes of Turkey against humanity and civilization”.  In response, the Turkish cabinet three days later approves the “Provisional Law of Relocation” by which the army is “authorised and compelled to crush in the most severe way any sign of resistance or aggression among the population… including to transfer and relocate the populations of villages and towns, either individually or collectively in response to military needs or…any signs of treachery or betrayal”

“By best estimate, some 800,000 of the Armenian deportees were to perish – starved, shot, or beaten to death – en route [to the] “barren reaches of northern Syria”.

BORN TODAY: in Zurich – Marcel Roland de Quervain, Swiss glaciologist, “known for his fundamental work on the metamorphism and physical properties of snow.”

Anatolia: In the Armenian city of Van, in eastern Turkey, the one month long siege of the city by Ottoman forces intent on suppressing Armenian activists is relieved by the arrival of Russian troops from the city of Malazgirt, temporarily under Russian control.

On the (British) Home Front: The Liberal Government (Asquith’s first ministry) is brought down by high levels of unpopularity, partly fuelled by the continuing failures at Gallipoli.

War at Sea: In the Straits of Otranto, between Italy and Albania, where the French are attempting to blockade the Austro-Hungarian navy inside the Adriatic (ie preventing access to the wider Mediterranean), the Austrian submarine U-5 torpedoes and sinks the cruiser Leon Gambetta, sending 547 sailors to their death. [Burg & Purcell].

The 3rd and 4th [gas] attacks took place on 26-27 April 1915 at Steenstrate-Lizerne, near Ieper, in which British, Sikhs and French were the victims. To the left of the Sikhs were French Colonial troops with essentially North Africans and at their right were the British. The Ferozepur Brigade, and the French colonial troops to the left of them, were the worst hit. More gas attacks followed on 27-29 April and 01-02 May 1915 and the victims were again British, Sikhs, Pathans, French and Algerians. [http://www.sikhiwiki.org/].

On the (Turkish) Home Front: In Istanbul the authorities arrest around 250 Armenian intellectuals and community leaders, today being conventionally referenced as the start of the Armenian massacres which some describe as a holocause or genocide. An estimated 1 to 1.5 million Armenians will die in the troubles ahead.

On the Western Front: at the Battle of St Julien (Ypres), the German army releases more chlorine gas, successfully breaking the line of the Canadian 1st Division, who have been advised to counteract the gas by urinating on thier handkerchiefs.