~ on the River Mersey – HMS Constance, a “C” class light cruiser for the (British) Royal Navy’s 4th light cruiser squadron of the Grand Fleet. She will take part in the Battle of Jutland (1916), and visit China in the late 1920s before being sold for scrap in 1936, aged 21.

~ at Whitmore Park on the outskirts of Coventry in the English Midlands – National (artillery shell) Filling Factory number 10.

~ In Lannelly, in South Wales – the idea of converting an existing factory for the production of six inch shells. The plan is approved by the Ministry in two days, and the first shell is produced in just 5 weeks.

BORN TODAY: In Swansea, Wales – Lillian May Davies, fashion model, and later Princess Lilian, Duchess of Halland, after her marriage into the Swedish Royal Family in 1976.

~ On the Thames Estuary in Purfleet, Essex – 16 cadets and their training officer on His Majesty’s Training Ship “Cornwall” when it is struck by a government tug.

~ in Mardin, near (what is now) the Turkish/ Syrian border, Ignatius Abded Mshiho II, the 61 year old Patriarch of Antioch, Head of the Syriac Orthodox Church.

Western Front: At one of the narrowest sections of no-man’s land, at Hooge in Belgium, German soldiers surprise British defenders with six of their new Flammenwerfer (flamethrowers) to capture the Hooge crater. [Burg & Purcell: Almanac of World War 1].

Australia: WIth a growing sense of unity among the Australian states, the nation holds its first “National Day”. 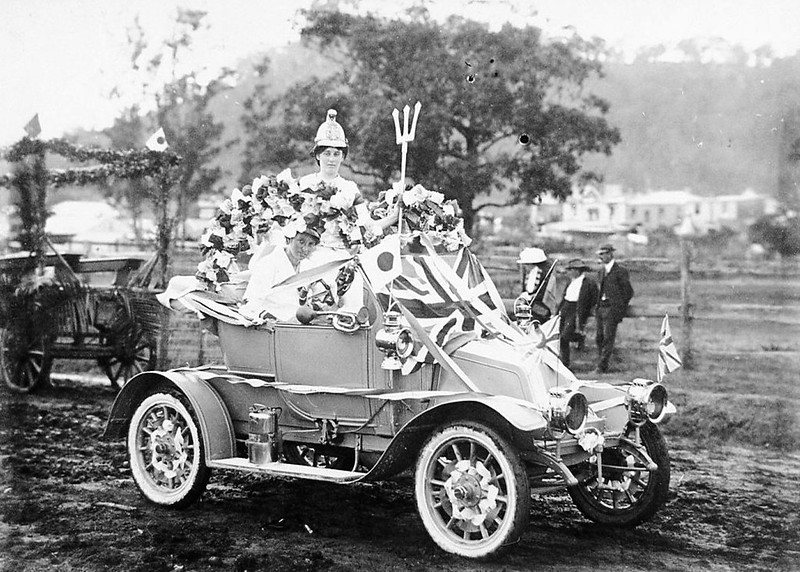 While in New Zealand, farmer and diarist George Adkin “levelled heaps in [his] Cow p[addock] all day”.

BORN TODAY: in Vilnius (in the Russian Empire, but occupied at the time by Germany) – Harold Pupkewitz, Lithuanian emigre and Namibian businessman.

Society and culture: at Penantigi Uchaf, Dinas Mawddwy in North Wales, today is a sheep-shearing day.

BORN TODAY – in a summer-house in Llanfairpwllgwyngyllgogerychchwyrndrobwllllantysiliogogogoch – the UK branch of the Women’s Institute.

Western Front: Over 1000 die in 12 hours today at the Battle of Hooge (aka Bellewaarde).

Home Front: William “Chalky” White, suffering with spinal injuries, and recovering at the Queen Mary’s Royal Naval Hospital in Southend (formerly the “Palace Hotel”) writes home proudly to his mum after he gets a visit today from Queen Mary herself.

~ Private George Potter Bagshaw of the Derbyshire Territorials celebrates in his diary: “EASTER SUNDAY I had one of the best breakfasts that I have had in France – eggs and bacon.”

The (Welsh) Home Front: Two German officers, prisoners of war, escape from Dyffryn Aled, Llansannan, Denbighshire. When they are re-captured in Merionethshire, a week from now, they will smile for the photographer outside Blaenau Ffestiniog Police Station, before later being sent [back?] to prison for 28 days.

The (English) Home Front: The Dean of St Paul’s Cathedral reads Rupert Brooke’s poem “The Soldier” from the pulpit during the Easter Service. Three weeks from today Brooke will be dead, dying ingloriously from septicaemia following a mosquito bite on a hospital ship in the Aegean.